Bemboka
Quiet and small dairying village lying on the edge of the mountains west of Bega.
Bemboka is a small dairying village 451 km south of Sydney via the Princes and Snowy Mountain Highways and 36 km west of Bega. The township was surveyed in 1876 and officially recognised in 1877. Originally known as Colombo it was changed to Bemboka in 1883 and a private subdivision called ‘Lyttleton’ was incorporated in 1923.

Bemboka was established to serve the needs of the local dairy farmers and the travellers on the Brown Mountain Route. Brown Mountain (1241 m) lies about 25 km west of Bemboka along the Snowy Mountains Highway. It was first crossed in 1816 when a bridle path was established. In 1822 a mail service from Cooma to the coast began traversing the route which became known as the ‘Postman’s Track’.

By the outset of this century Bemboka had cheese and butter factories operating, hotels and other shops. Today it is notable because it is a classic Australian timber town with nearly all the buildings being made out of timber. 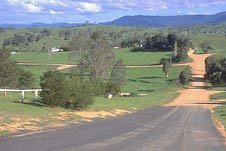