Candelo
An attractive and historically significant village.
Candelo, 451 km south of Sydney via the Princes Highway and 22 km southwest of Bega, is a tiny but charming village that has been designated an urban conservation area. Its old, attractive, timber buildings with their shady verandahs invite a leisurely stroll through the town’s tranquil atmosphere and turn-of-the-century charm.

Candelo was originally part of the land owned by the Imlay Brothers from the 1830s which passed to the Walker Brothers when the Imlays encountered hard times the following decade. It was sold to the Twofold Bay Pastoral Association in the 1852. The village developed in the 1860s to serve as a centre for both the through-trade, at what was something of a junction of roadways, and for the independent farmers who moved there after free selection became law in an 1861 Land Act.

View across the river to St Peters Anglican Church

Rosemont
If you turn into Eden St it will take you to historic ‘Rosemont’. Formerly a convent it is now a private residence.

The Candelo Police Station today. This building was built in the late 1800’s and was the Local Court House and Police Station for the surrounding towns and areas. Today it is home for Sen Con Grant Beasley and his wife, the Police Station at one end, home the other end. The station end is shown above.

Below is a picture taken in the late 1800’s of the front of the Court House, (now the living quarters). This building has 15 foot ceilings and a front door around 10 foot high. In this photo you can see the Police Officer in the front yard on your left, note the old type uniform and hat. 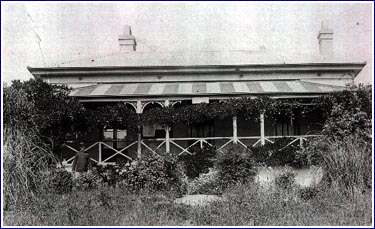 Take a look back in time and see what Candelo’s main street looked like then. If you have ever been to Candelo, you will see that nothing much has changed since then……the buildings are still there today, and in place of the dirt road, there is tar.
Click here to visit history.