Merimbula
Located 471 km south of Sydney, Merimbula (population 4259) is a small charming seaside town rising on the tree-clad hills around Lake Merimbula which is actually the wide mouth of the Merimbula River.

Once inhabited by the Dyirringany Aborigines the area was first explored by Europeans when Bass and Flinders travelled up the Pambula River and Lake while on a voyage south in 1797.

The Imlay Brothers owned land from Broulee to south of Twofold Bay and west to the mountains by the 1830s. The economic depression of the early 1840s resulted in the loss of their property to Sydney merchants, the Walker Brothers, who in turn sold their leases to the newly formed Twofold Bay Pastoral Association in 1852. 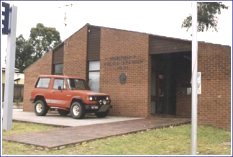 Merimbula began its existence as a private village belonging to the Association which opened it as a port in 1855. All that remains of the original port are two sheds.

A postmaster was appointed in 1857 and allotments of land went on sale in 1860 when the Association was dissolved. The first ferry service across the ‘lake’ was established in 1857 and a bridge constructed in 1908 (replaced in 1982).

Aborigines inhabited South Merimbula until early this century and given that oyster farming is still a major industry, a large number of middens have been found on both sides of the lake.

By 1866 the town’s population was around 90. There was a weekly steamship service from Bega to Merimbula and an eight-horse wagon followed this route on a weekly basis two years later. After this the town continued to grow slowly as a service centre for the surrounding rural area. It was not gazetted until 1912 and little changed until the 1950s when it first became a popular holiday resort.

Munn Tower House
A cornflour factory, the Maizena Company, was established in the town by Matthew Munn in 1865. Matthew Munn built a large stone cottage called ‘Courunga’ (known as the Munn Tower House) around 1870. It is now a prominent landmark. His son added extensions about ten years later including a remarkable two-storey timber tower with attic, and two single-storey timber structures with castellated parapets. The residence is privately owned. It can be found at 20 Monaro St. 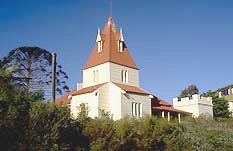 The Museum and Historic Buildings
The Merimbula-Imlay Historical Society has a Museum which is open Tuesdays, Thursdays and Fridays from 2.30 p.m. – 5.00 p.m. It is located in Main Street. This stone building was the old Public School (1873-1874). It is thought to be one of only three surviving examples in New South Wales of a school containing both classrooms and teacher’s residence. There is an oyster punt at the side of the museum which dates from about 1915.

The Steamer Wharf
A big steamer wharf was erected in the deep water beyond the sand bar at the turn of the century and was used by shipping until the steamer service ended in 1952. Though popular with fishermen it was deemed unsafe and destroyed in 1979. Local efforts saw the reconstruction of the wharf in 1983. The wharf storage sheds were classified by the National Trust and restored in 1987 for usage as an aquarium and restaurant. Open 10-5 daily a diver hand-feeds the fish during school holidays. To visit these sites follow Main St and then take the right branch into Lake St. The view from the wharf is outstanding.

The population of Merimbula and immediate area is approximately 9,000. Holiday season population can be anything up to 60 – 70,000 people. There are a large number of holiday homes in the area which are vacant for much of the year.

Besides normal police work there is considerable work involving NSW Fisheries and the illegal poaching of abalone within the area. There is also a very active Neighbourhood Watch and Safety House program within the area.

Check out the best means of transport in and out of Merimbula, also the quickest! Click here.