Tathra
Tathra is a small coastal township (population 1571) situated high on the bluff above its wharf 446 km south of Sydney via the Princes Highway.

The area west of what is now Tathra was first settled by Europeans when pastoralists began illegally squatting on crown land in the 1820s and 1830s.

Following an enquiry into the transport facilities in the Bega district in 1851 the Illawarra and South Coast Steam Navigation Company was formed.

Tathra came into existence as a small jetty which served as a shipping outlet for a group of local farmers led by Daniel Gowing. Previously the nearest port had been Merimbula 25 km away and Gowing had offered financial reward to anyone willing to ship produce to a point further north. It was replaced in 1861-62 by a wharf which was erected out of funds donated by local farmers and the Illawarra Company. 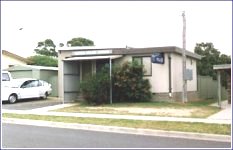 The township was surveyed in 1861 and regular shipping commenced in 1862. Passengers travelled to and from Sydney with pigs and produce for company (hence its contemporary fame as the ‘Pig and Whistle Line’).

The wharf was built of turpentine driven into solid rock. The site was chosen due to the shelter it offered from southerly winds and because it was the best site available between Merimbula and Bermagui.

The absence of a railway line and poor roads made the steamer service crucial. The Princes Highway from Batemans Bay to the Victorian border was still gravel in 1940. South Coast shipping finally disappeared in 1956.