Adaminaby
Quiet town in the Snowy Mountains – popular destination for people fishing for trout.
Located 51 km northwest of Cooma and 453 km southwest of Sydney, the new township of Adaminaby has a population of about 400 and is 1021 metres above sea level.

The original town of Adaminaby (which is now under the waters of Lake Eucumbene) came into existence in 1885 although pastoralists had been in the area since the early 1830s. Initially the population of the area was sparse. John Cosgrove and Charles and Henry York were the first settlers and they named one of their large land holdings Adaminaby (probably spelt Adamindumee and possibly meaning either ‘a camping or resting place’ or ‘place of springs’ in the language of the local Aborigines). 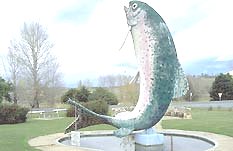 For thirty years the country around Adaminaby remained sparsely settled by Europeans. The land was grazed but the living was hard. It wasn’t until the discovery of gold in the area in 1859 (Kiandra) and 1860 (along the Eucumbene River) that people began to move into the area in significant numbers. Being located midway between Cooma and Kiandra, Adaminaby enjoyed a brief boom at this time as it became a convenient stopover point for gold prospectors on their way to the goldfields.

It is an hilarious comment on local government decision making processes that when the township was finally proclaimed on 25 March 1885 it was named Seymour (a name it had been given in 1860 when the town had been surveyed – but a name which had never gained favour) but in less than a year public opinion prevailed and on 9 October 1886 it was renamed Adaminaby.

These events are all recorded on a plaque on the side of the town’s General Store which also notes that the Snowy Mountains Authority moved the town to its present site in 1956-57 to make way for the rising waters of Lake Eucumbene.
So complete was the removal that even the old churches (perhaps the most interesting buildings in town) were moved. Of the more interesting are St John’s Anglican Church, Adaminaby (on the hill behind the shopping centre) which was originally built in 1906 and moved in 1956 and the Uniting Church, previously the Presbyterian Church, which was built in 1886.

Lake Eucumbene
Lake Eucumbene, the largest of the man-made lakes in the Snowy Mountains, was completed in May 1958. Its earth and rockfill dam is 116 metres high and 579 metres long. It is capable of containing 4 799 100 ML of water – more than three times that of Blowering Dam. Eucumbene filled so slowly so that as recently as 1978 the people of Adaminaby could hold a rooftop regatta over the remnants of their old houses. In recent years droughts have lowered the level of the dam revealing the ruins of the old town. 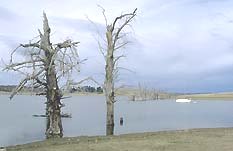 A boat moored in Lake Eucumbene near Old Adaminaby

Historic Buildings in Old Adaminaby
It is still possible to view the remnants of Old Adaminaby. If you drive a couple of kilometres out of town towards Kiandra there is a sign to Old Adaminaby which is located 7 km from the Snowy Mountains Highway.

There’s a nice irony about Old Adaminaby. It is now newer and more attractive than new Adaminaby. In recent times people have built attractive fishermen’s chalets and holiday houses on the foreshores and the area has been turned into a pleasant holiday retreat.

In fact there are only four original buildings left in the town – the Methodist Church which is now surrounded by attractive picnic grounds on the edge of the lake, the Old Schoolhouse which is the office and residence for the Caravan Park, and two other dwellings. Apparently over 100 buildings, including 75 houses, were removed from Old Adaminaby to the site of the new town.

A source of fascination for visitors at Old Adaminaby is the large metal structure which sits rather forlornly beside the town’s jetty. It was originally built by the owner of a cruise company as a mooring point for his vessels. The idea was that people taking the cruise would pass through this strange metal barge before going on their cruise. The plan was that the barge would have a complete working model of the Snowy Mountains Hydro-electric Scheme. The plan never eventuated and the barge now lies on the waterline near the town.

For filmgoers the Old Adaminaby Race Track (located on the road to Rosedale on the Cooma side of the town) was used in the film Phar Lap.