Bombala
Small and attractive rural centre in south-eastern New South Wales.
Located 504 km south west of Sydney, 81 km south of Cooma and 747 m above sea level, Bombala is a small and attractive rural service centre located in the far south east corner of New South Wales. The main road from Cooma to the coast does not pass through Bombala and therefore the town has remained relatively untouched. The district around the town, which can get very cold in winter, supports a variety of agricultural activity including sheep and beef cattle, vegetable growing and timber milling. The area is also known as one of the state’s best trout fishing districts. 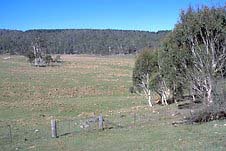 The countryside between Cooma and Bombala

As far as can be determined the area was inhabited by the Ngarigu Aborigines prior to European settlement and it is from their language that the word ‘bombala’ is said to have come. It probably meant ‘meeting of the waters’.

Europeans settled the Bombala district as early as the 1830s and by about 1833 Captain Ronald Campbell had established a large run. By 1848 he owned nearly 6 500 hectares which he called ‘Bombalo’. The settlement of the area continued throughout the 1840s. By 1849 the small township of Bombala had its own post office and by 1850 a regular mail service was being run between the town and Eden on the coast.

It was around this time that a street plan was drawn up and Bombala quickly gained the reputation as one of the prettiest towns in the Monaro. By 1856 its population was nearly twice that of Cooma (now the major town in the district) and a number of substantial public and commercial buildings had been constructed.

The town continued to grow and by the early 1890s two bridges had been constructed over the Bombala River. It was around the turn of the century that Bombala was briefly considered as a possible site for the new Federal Capital. The local citizens agitated for the construction of a railway line but it did not arrive until 1921. Today the town is a typical small rural centre providing services for the surrounding farmland. The drive from Cooma to Victoria’s Gippsland coast via Bombala is particularly attractive.

One of the towns most interesting historic remnants is the Olympia Cinema which dates from the 1930s when most of the town would have been regular attenders. It is an interesting example of the ornate style of rural cinema which was popular at that time.

The most notable historic buildings in town include the National Australia Bank (1871) which was the former CBC Bank and was designed by J. F. Hilly. The Literary Institute dates from 1865 but is currently in a state of disrepair. In Caveat Street there are number of old houses many of which date from the 1860s.