The town and the region both have Aboriginal names. It is thought that Monaro was an Aboriginal word meaning ‘treeless plains’ and that Cooma, originally spelt ‘coombah’, means either ‘big lake’ or ‘open country’. Take your pick.

The area was first explored by Europeans in 1823 when an expedition led by Captain Currie and Major Ovens moved south from Lake George searching for good grazing land. By 1827 the Monaro Plains had been settled as far as Berridale and by 1847 there were enough settlers in the area for a Court of Petty Sessions to be established at the new settlement of Cooma. Two years earlier a small Gothic Revival church, Christ Church of England located 2 km south of Cooma on Myalla Road, had been built. It is the oldest church in the area and one of the oldest buildings in the Monaro. It was restored in 1960 and still stands today.

Cooma was surveyed in 1849 and the first sales of village lands occurred the following year. It would probably have remained a small rural township had gold not been discovered near Kiandra in 1859. The discovery brought boom times to the area and for the next twelve months the town of Cooma, which was the only decent sized settlement in the area, was inundated by miners and prospectors. It has been estimated that over 15 000 people passed through the town in less than a year.

By the 1880s the town had returned to its rural simplicity. This was to be altered forever by the arrival of the railway in 1889 which ensured easy access to the snowfields and made Cooma the centre of a winter tourist industry which continues to boom today.

The final process in the town’s growth occurred in 1949 when Cooma became the headquarters for the huge Snowy Mountains scheme which was to bring workmen from 27 nations (see the flags in Centennial Park) to the town.

At the peak of the work on the Snowy Mountains Scheme Cooma was the headquarters for some 120 camps dotted throughout the Snowy Mountains from Tumut in the north to Pilot Camp far south of Khancoban. The SMA Information Centre (on the main road from Canberra) is open 7 days a week and provides an excellent relief model of the entire region as well as a well appointed theatrette with movies chronicling the history of the project.

The walk then moves along Massie Street past the Post Office (1877), Solomon’s Store and the Cooma Hotel (both built in 1862), across to the impressive Cooma Court House (1889) with its shuttered French windows and gracious front verandah, and past the old prison which, although built in the 1870s, is still in use today.

It then passes Nijong Reserve and enters Lambie Street – surely one of the finest domestic streetscapes in rural New South Wales. The street has a total of eleven listings in the National Trust Register including a beautiful pair of late Victorian semi-detached cottages at 39-41 Lambie Street, an early coursed stone terrace dating to 1850 with five bays and a rolled iron roof at 55 Lambie Street and a gracious two storey Victorian house (1880) which now spreads from 51-53 Lambie Street. The Lord Raglan Hotel or Inn at 11 Lambie Street, which dates from 1854 and is the oldest inn in the district, became a bank in 1860 and is now a gallery.

At the end of the street is the Royal Hotel and its outbuildings. The hotel was built in 1858 and has a superb cast iron verandah and an attractive hipped roof. Lambie Street has great beauty and grace.

Nearby, on the opposite side of the Highway, is the Southern Cloud Memorial Park which commemorates the disappearance of the Southern Cloud aircraft which crashed in the Snowy Mountain in 1931. It was on a flight from Sydney to Melbourne and was Australia’s first major air disaster. It is a comment on the difficulty of the terrain and the wildness of the area that the wreckage in which 8 people were killed wasn’t found until 1958.

The route starts at Centennial Park at the bizarre ‘Man from Snowy River’ sculpture. Centennial Park, once a swamp, became a football field in the 1890s and had trenches dug in it during World War 11 in preparation for an imminent Japanese invasion. 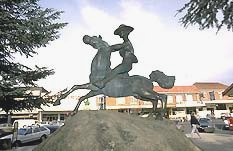 The Man from Snowy River statue in Centennial Park

Lions Lookout
One of the more bizarre places in Cooma is the Lions Lookout (near the Snowy Mountains Authority headquarters). Opened during the Festival of the Snows in 1960 it is now completely blocked by pine trees which have grown in the interim. The best the visitor can hope for are glimpses of the town through the pine trees and in a decade’s time even these glimpses will have disappeared.

Llama Farm
Another true novelty in the area is the Llama Farm. The llamas were imported from New Zealand and are now used as pack animals (there are children’s rides available) and for their fleece. The farm is located 19 km from Cooma on the road to Adaminaby.