Nowra-Bomaderry
Located 160 km south of Sydney via the Princes Highway and 108 m above sea level Nowra is the commercial centre of the Shoalhaven District on the South Coast of New South Wales. Written ‘nou-woo-ro’ by Charles Throsby in 1821, Nowra is an aboriginal word reputedly meaning either ‘camping place’ or ‘black cockatoo’.

Nowra lies on the southern shore of the Shoalhaven River, while Bomaderry is on the northern bank, east of the highway. With a combined population of 21,942 in 1991 the two towns constitute the largest population centre on the South Coast beyond Wollongong and are rapidly expanding as more and more people move to the area.

Nowra is a major service centre for the agricultural hinterland and coastal resorts in the district. It also serves the naval establishment at Jervis Bay. Dairying and tourism represent the two major industries in the area. The milk is processed into other dairy products at Bomaderry. Other local income derives from vegetables, timber, flour, light industry and a large paper mill.

Prior to European settlement the area was probably inhabited by the Dharawal Aborigines. The survivors of the wreck of the Sydney Cove walked through the area in 1797 and George Bass explored it later that year. He followed Seven Mile Beach and crossed the shoals at the entrance to the river. Unimpressed with the shallowness of the river mouth he called it ‘Shoals Haven’. It is now known as the Crookhaven River.

In 1805 the coastline was mapped from the land by Lieutenant Kent and assistant surveyor-general James Meehan. They explored the area, noting the dense rainforest and stands of solid timber.

Cedar-getters were operating in the area by 1811. They floated and towed the logs down the river to Greenwell Point where they were loaded aboard waiting steamers.

In 1812 surveyor George William Evans and his party, guided by an Aboriginal man named Bundle, journeyed from Jervis Bay to the Shoalhaven River. They crossed it in a bark canoe about where Nowra Animal Park is now located and climbed Cambewarra Mountain, where Evans remarked upon the magnificence of the view, which took in Kangaroo Valley. They then descended to Broughton Creek and struck out to the coast before returning to Appin.

In 1818 James Meehan returned in the company of explorers Charles Throsby and Hamilton Hume. The men had been sent by Governor Macquarie who had taken an interest in Jervis Bay. Their task was to find a route from the southern tablelands to the Bay.

In 1822 Alexander Berry began the settlement of the district when he obtained a land grant at Mt Coolangatta. Using convict labour he joined the Crookhaven and Shoalhaven Rivers by having a 209-yard canal dug. The first canal to be constructed in Australia it took twelve days and Comerong Island was created as a result.

Ex-convict Mary Reibey applied for a grant in the Burrier area, probably in 1824 (some sources place the application as early as 1816), one of the first south of the river. The area was called ‘Purreah’ by Charles Throsby in an 1818 expedition, a word said to mean ‘crossing place’. Her descendants are still living in the area.

1824 was the year that Prosper De Mestre was promised land by Governor Brisbane. 1300 acres were authorised on the southern shore of the river in 1829 but he did not receive the deed until 1836, naming the property ‘Terar’.The homestead, ‘Mill Bank House’, which still stands in Millbank Road, was probably erected at this time. A village, named ‘Terrara’, soon began to develop. The spelling was changed to ‘Terara’ in 1935. De Mestre died in 1844 and Mary and two of her sons, Andre and Etienne (she had 11 children), furthered the development of the village, which was, at that time, the largest settlement in the area. They added three wharves in 1854 and established a steam-driven flour mill in 1856.

In 1852 the Nowra township site was gazetted and the first report of gold at Yalwal was made. The first church in the district was erected in 1855; an iron-frame Presbyterian building at Numbaa. The first public school in the area was also opened at Worragee. In 1857 town blocks went on sale in Nowra, many going for Â£4.

In 1861 a post-office service was established at Nowra. That same year the racehorse ‘Archer’, bred in Braidwood but trained at Terrara by Etienne de Mestre, won the first Melbourne Cup and repeated the feat the following year. Etienne had set up a stud, stables and race track at Terrara in his twenties and held unofficial races that were professionally handled and well-attended.

Dave Power walked and rode ‘Archer’ the 550 miles to Melbourne in just over three weeks. In 1863 De Mestre was refused permission to enter the horse again due to a technicality. His acceptance telegram arrived just in time but, it being a public holiday in Melbourne, it was not delivered until the following day and was thus not accepted by the Victorian Turf Club. Incensed he did not enter another horse until 1867 when ‘Tim Whiffler’ won him the Cup again. De Mestre won two more Melbourne Cups, with ‘Chester’ in 1877 and ‘Calamia’ in 1878. His five wins were unmatched until Bart Cummings achieved the same feat in the 1970s.

In 1865 the Shoalhaven Catholic parish built a church at Nowra of bark slabs and iron roof. A ferry across the river commenced operations the following year. The first local newspaper was established at Terrara in 1867. By 1870 the town had nine hotels, four general stores, a town hall, a post office a butcher’s, two banks, a flour mill and numerous other establishments. However that year also witnessed the worst recorded flooding of the Shoalhaven, convincing many more to leave Terrara for Nowra, which would soon become the primary urban centre in the district.

In 1875 St Andrew’s Presbyterian Church was built at Nowra. The interesting structure still stands today. A masonic lodge was added in 1878 and a post office in 1883. The old Shoalhaven River Bridge was erected in 1881 of wrought iron, prefabricated in Delaware in the USA and shipped to New South Wales by sea. A second bridge was constructed in 1980 to cope with the increased volume of traffic.

In 1885 Nowra was proclaimed a town. A suspension bridge was constructed over Nowra Creek in 1887, the only one of its type in the state. In 1891 Bomaderry township was laid out at its present site. The Aboriginal word from which the name derives was probably ‘Bunbaderra’. The meaning has variously been given as ‘man throwing nulla’ (a club), ‘fighting ground’ or ‘running water’.

Bomaderry was to become the terminus of the south coast railway line two years later. The track progressed no further as the Nowra bridge was found to be too weak to support it. A coach service from Nowra to Bega also commenced operations that year. Covering 320 miles, it required 150 horses and 40 coaches. These developments contributed to Nowra’s development.

Other developments of interest in the area include the establishment of a water supply to Nowra in 1894; the opening of the present courthouse in 1897 and the Nowra police station in 1900, restored and converted to an historical museum in 1980; the establishment of the first factory of the Nowra Co-operative Dairy Company in 1902; the opening of the United Aborigines Mission with an initial intake of seven children in 1908; the unveiling of Cambewarra Lookout in 1910 as a tourist attraction and the introduction of electricity to Nowra in 1927. 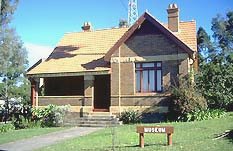 Historic Buildings
On the corner of West St and Worrigee St is ‘Meroogal’, an historic, timber, gothic-style house managed by the Historic Houses Trust of NSW. Built in 1885 it contains original household contents collected by four generations of women in the Thorburn and McGregor families.

On the other side of Worrigee St are the showgrounds, which have an impressive pavilion opened in 1905. Here the Agriculatural and Horticultural Show is held in February and the Shoalhaven City Markets on the third Sunday of each month.

Bundanon
‘Bundanon’, an historic two-storey sandstone homestead (1866) situated on 1000 acres of land adjacent the Shoalhaven River, was the home and studio of Arthur Boyd for many years. Along with the gardens, grounds, some antique furniture, the studio and some artworks it was recently given to the Australian people by Arthur and Yvonne Boyd. Built of locally-quarried stone the house is located at the end of a private road that runs off Bundanon Road. To get there follow Illaroo Rd out of town (the turnoff to the west on the northern side of the bridge). You will come to a signposted branch to the left into Hughes Rd then another left turn into Bundanon Rd. The entire route is well-signposted.

Bens Walk (5.5 km) also commences here, following the shoreline in a westerly direction then diverting to the south along Nowra Creek which runs through the middle of the reserve. The track retraces part of the walk established in the depression years by Ben Walsh. Stop and enjoy the views from Hanging Rock Lookout, a precariously positioned overhanging rock formation with views across the river. Nowra Creek is spanned by a suspension bridge which provides access to the Depot Farm Reserve.