Ulladulla
Substantial coastal holiday town surrounded by beaches and National Parks
Ulladulla is located 227 km south of Sydney via the Princes Highway. It is a coastal holiday resort, retirement centre and fishing port. The local economy is supplemented with dairying, timber-getting and the production of honey.

There are a number of theories about the origins of ‘Ulladulla’ as a place name. The indigenous word is variously given as ‘ullada ullada’ and ‘Woollahderra’ supposedly meaning ‘safe harbour’. The apocraphyl story is that the word ‘Ulladulla’ is a compromise between the Aboriginal title and the phrase ‘holey dollar’ whichr was a form of currency in NSW from 1814 until about 1824. 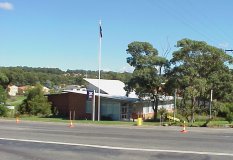 For the 20,000 years prior to white settlement the coastal area was occupied, depending on what source you read, by the Dhurga, Walbanja and/or Wadandian Aborigines. Middens and caves used for shelter testify to their occupation of the land. When Captain Cook travelled up the coastline in 1770 he noted, at Bawley Point, south of Ulladulla, people on the shore who ‘appeared to be of a black or very dark colour’. On April 21 he sighted Pigeon House Mountain, to the west of the present town. He described it as ‘a remarkable peaked hill, which resembled a square dove-house, with a dome at the top, and which for that reason I called the Pigeon House’.

In 1827 Thomas Florance surveyed the coastline from Burrill to Narrawallee, naming much of what he saw. He anchored his boat, the Wasp , in what is now called Ulladulla Harbour and hence it became known, for a time, as Wasp Harbour.

The first land grant in the area was issued in 1827 to Reverend Thomas Kendall (1778-1832). He settled north of the present township of Milton, calling his property ‘Kendall Dale’. There he ran cattle and felled timber utilising ticket-of-leave men for labour. Kendall travelled often from Ulladulla to Sydney but was drowned when his small boat, the Brisbane, was wrecked off Jervis Bay.

His grandson, Henry Kendall, was born on the estate in 1839. Although he only lived there for five years the people of Ulladulla helped to launch his literary career when they instigated, by public subscription, the publishing of his first book, Poems and Songs , in 1862. He was to become one of Australia’s most distinguished contemporary poets.

An area called ‘The Settlement’, upon the site of present-day Milton, was occupied by farmers. Creeks, rivers, gorges, mountains, lakes and swamps made access by land problematic so the settlers began to use the harbour, imaginatively known as ‘The Boat Harbour’, for the shipment of produce. There were no breakwaters nor any jetty, just a chain by which ships were secured.

Other grants were issued in the 1830s and the site for a village was surveyed in 1837. With an abundance of red cedar in the area, much in demand for the construction of furniture, Ulladulla prospered as a timber port in the 1840s.

The first houses consisted of a sapling framework with strips of dried bark for covering. As families developed (until 1850 there was only one white woman living at Ulladulla Harbour) larger slab houses were erected.

Shipbuilding was also undertaken from about 1840 by David and James Warden on the beach inside Ulladulla Harbour. The promontory known as Warden Head is named in their honour.

Other early industries included dairying, wheat-growing (destroyed when ‘rust’ hit the south coast in the 1860s), pig-rearing, honey, maize and vegetable-cultivation, a tannery works at Millards Creek and the mining of silica and quartzite which was loaded on a wharf at Bannister Point and shipped out for usage in the furnaces at Newcastle.

In 1856 the population of Ulladulla was around 300. A road was marked out in 1858 although it was not suitable for laden wagons. That same year a wooden jetty was built by private subscription, being replaced by a government wharf in 1865. The stone steps are all that remain in Ulladulla Harbour. Markets are held at the wharf on the second Sunday of each month. 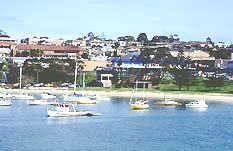 View across Ulladulla Harbour to the breakwater

Today Ulladulla is a peaceful, relaxed seaside resort. The harbour, with two boat ramps, is nestled between two enclosing headlands. With a couple of notable beaches, seven lakes nearby and a hinterland of state forest, mountain ranges and national parkland it is ideal for all aquatic activities, camping, bushwalks and scenic drives.