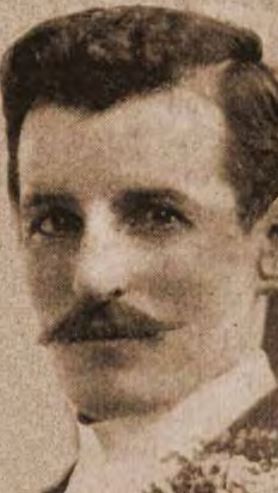 About 11 a.m. Sunday 12 October 1902 Constable Johnston was off duty at his home at Elwood. He responded to a complaint that a man had tried to abduct a neighbour’s 8 year old daughter. Johnston immediately set off in pursuit and located the man in Milton Street Elwood. The suspect George Shaw had a lengthy criminal record. Unbeknown to Johnston Shaw was also the prime suspect for the murder of Constable Guilfoyle in Redfern New South Wales some months previously. When Johnston approached him Shaw produced a revolver and fired. Fatally wounded Johnston died within minutes. Shaw committed suicide at the intersection of Chapel Street and Rosamond Street a short time later. 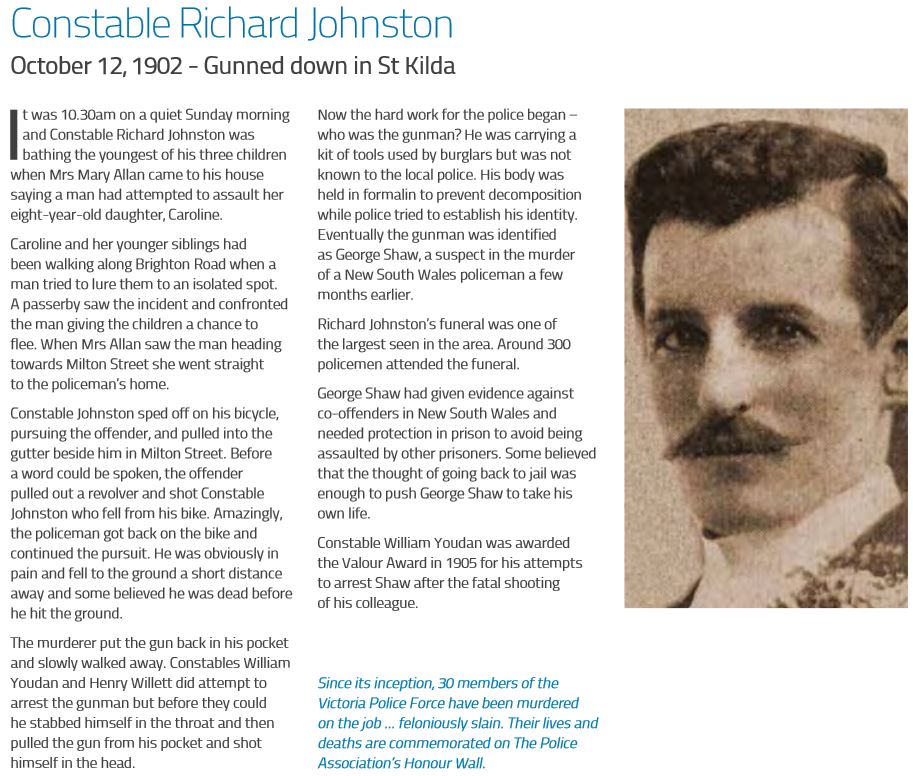 About 11am on 12 October, 1902 Constable Richard Johnston was off duty at his home at Elwood (Victoria) when a neighbour informed him that a man had attempted to abduct her eight year-old daughter. The constable quickly set off on his bicycle after the suspect and located him a short distance away. When the suspect saw the approaching policeman the offender drew a revolver and shot Constable Johnston, inflicting fatal wounds. The offender then left the scene, only to commit suicide a short time later when confronted by other police.

At the St. Kilda Cemetery on Sunday afternoon the Chief Commissioner of Police (Mr O’Callaghan) performed the ceremony of unveiling a marble monument erected by members of the police force over the grave of Constable Richard Johnston, who on 12th October last was shot dead by a notorious criminal named Shaw. The mayor of St. Kilda (Cr O’Donnell) presided, and amongst those present were Mr. McCutcheon, M.L.A. ; Inspector Hillard (officer in ohargd of the district), Inspector Crampton, Sergeant Davidson, the widow, with her children and her mother, many members of the force and a large gathering of the public.

Mr O’Callaghan retold the story of Constable Johnston’s death. On Sunday morning, when off duty, he was told that a ruffian had just been tampering with a child. He mounted his bicycle, and rode after the man who, when overtaken, turned and shot him through the heart. Remaining erect on his machine he rode nearly 100 yards, then his muscles relaxed, and he dropped dead. No more tragic   occurrence saddened the records of the Victorian police force. Constable Johnston had upheld the best traditions of the force and taught a lesson that every member should lay to his heart. The event gave rise to the question why the State should go on feeding and pampering human tigers like the murderer of Constable Johnston, and letting them free again to prey upon the public. Why had a penal system been tolerated for so many years, under which such brutes,   instead of being kept in confinement, were allowed to march at large to the detriment of all respectable people? In 1881 he had arrested the murderer of Constable Johnston. He was then known as a   man who would “shoot at sight,” and though taken by surprise, had found time to grasp a pistol. A few years later he was set at large in the community. It was high time the public raised a protest against the liberation of such blood thirsty brutes. Drastic legislation should be introduced, and introduced quickly, to amend our penal system. Through the action of a generous public and a just Government the widow and children have had their material wants provided for.

Mr McCutcheon said he quite agreed with the remarks that had been made as to the manner in which criminals were pampered by the State. It was time some change was made in the law. The Government permitted criminals to multiply, and placed them in comfortable buildings, where they were well fed and well kept, and lacked only the company of their former friends to make them happy. He considered that every member of the force in both town and country should be armed with a revolver.

Inspector Hillard said that as far as he had been able to ascertain not a single instance could be recalled in which a member of the Victorian police force had played the part of a coward.

Several hymns, including one specially written for the occasion, were sung before and after the ceremony. – “Age”

[…] 11am on 12 October, 1902 Constable Richard Johnston was off duty at his home at Elwood (Victoria) when a neighbour informed him that a man had […]