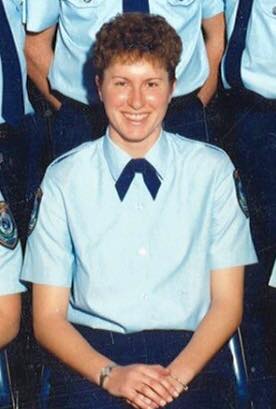 Cause of death:  Accidentally Shot – by collegue – Service weapon

Memorial 2:  Memorial plate on the front outside wall of Leeton Police Station.  Dedication done on 30 November 2015.  Photos below.

About 2.15pm on 30 November, 1988 Constable Wilson was on duty at the Leeton Police Station when she suffered a severe gunshot wound to the head when another member’s service revolver discharged. Although treated at the scene by colleagues until the ambulance arrived, she passed away at the Wagga Base Hospital at 5.45pm the same day.

The constable was born in 1968 and joined the New South Wales Police Force on 9 May, 1988. At the time of her death she was stationed at Leeton.

Sharon is mentioned on the Police Wall of Remembrance

SYDNEY: The NSW Police Commissioner, John Avery, will decide whether charges should be laid against a constable allegedly involved in the shooting death of her 20 year-old colleague on Wednesday.

A police spokesman said yesterday a team of detectives was waiting to interview the young officer over the death of policewoman Sharon Wilson at the Leeton Police Station, in the state’s Riverina district.

He said results of the investigation would be forwarded to Mr Avery for consideration.

A police spokesman said the detectives — including two from Sydney’s Internal Affairs department, two from homicide, a ballistics expert and a police psychologist — were waiting to talk to the 19-year-old constable.

Probationary Constable Wilson was shot in the head by one bullet from a service revolver while on duty at Leeton Police Station, at 2.15pm on Wednesday.

She was rushed to Wagga Base Hospital, but died 3 1/2 hours later.

The policewoman awaiting questioning had been treated for shock and was being cared for by friends and welfare personnel, the spokesman said.

Detectives hoped to talk with her last night.

Miss Wilson was studying visual arts at the Riverina Murray Institute of Higher Education in Wagga.

Her body will be transported to her home at Uralla, where a funeral will be held at 1pm on Monday.”

SYDNEY: Junior police officers could be made to leave their guns at work after a young constable accidentally killed his best friend while cleaning his service revolver at home on Monday.

An internal police investigation into the shooting would look at the controls on probationary constables’ possession of weapons, the NSW Minister for Police, Ted Pickering, said yesterday.

Constable Andrew Pearce, 20, was cleaning his .38 service revolver in the bedroom of his Greystanes home in Sydney’s west at noon on Monday when the gun discharged and hit his friend Andrew James McDonald in the chest.

The incident was the second fatal shooting by a probationary constable in the past four months.

Acting Police Commissioner Angus Graham refused yesterday to comment on Monday’s shooting and was unable to say whether Constable Pearce, an officer with one year’s service, would be charged over the incident.

He said the fatal shooting was the subject of a full investigation by the police’s Internal Affairs Department.

“When we have these incidents we always review our arrangements,” he said.

A policewoman fatally wounded a colleague with a shot from her service revolver which she believed was empty, the Leeton Local Court, in south-west NSW, heard yesterday.

Constable Wilson died of head injuries at the Wagga Wagga Base Hospital as a result of the shooting.

Constable Harvey McRae told the court that he was sitting at a computer terminal when he heard the firing pin of a police revolver strike the empty chamber.  Constable Wilson had said, “Oh God, don’t do that.  You scared the living daylights out of me”.

He said Schneider pointed the revolver toward Constable Wilson and said:  “No, it’s empty, see?”  The gun then discharged.

Schneider said she went into the sergeant’s office and re-loaded her gun.  The court heard that four live bullets and one spent one were later removed from the revolver.

Not guilty of manslaughter

ALBURY: A policewoman who fatally shot a colleague has been cleared of manslaughter after a hearing in the Albury District Court. Sheree Ann Schneider, 20, of Pine Ave, Leeton, was charged with the manslaughter of Sharon Louise Wilson, 20, of Leeton, who died from injuries received in the shooting.

Constable Wilson was shot in the head while speaking on the telephone in the communications room of Leeton police station on November 30 last year.

Miss Schneider gave evidence at the committal hearing on Friday.

She said she had gone to the sergeant’s office where she had unloaded her special issue five-shot .38 service revolver. She told the court she was sure five bullets had fallen from the revolver’s cylinder and into her hand.

Miss Schneider said she had left the bullets in the office and returned to the inquiry counter area.

Thinking the gun was empty, she “dry fired” it.

Miss Schneider said Constable Wilson had become frightened and said: “Oh God, don’t do that. You scared the living daylights out of me.”

She had said to Constable Wilson: “No, it’s empty, see” and then pulled the trigger “to reassure her she had nothing to worry about.” The gun had discharged.

Asked by her counsel, Mr John Dailly, what she had thought when the gun discharged, she said: “I couldn’t believe it! I was sure I had counted five bullets.”

It was not until she had returned to the sergeant’s office that she realised she had made a mistake.

Although Miss Wilson had been shot, Miss Schneider said she was unaware at the time the gun had been pointing at her colleague.

Miss Schneider said she had returned to help Miss Wilson, who lay on the floor bleeding profusely from a wound to the left temple.

She said she placed both hands over the wound to try to stop the bleeding.

The court was told Miss Schneider had received 200 minutes pistol training at the police academy and had been issued with the smaller five-shot revolver after failing her first shoot with the larger six shot model.

Mr Dailly said the shooting had been an accident.

“It was totally unintended, unexpected and unforeseen,” he said.

In discharging Miss Schneider, Magistrate Barry Wooldridge said she had made a “great mistake” when counting the bullets. But the fact remained that there was no intent on Miss Schneider‘s part, no animosity between the two and no evidence she had deliberately pointed the gun at Constable Wilson.

SYDNEY: The Director of Public Prosecutions said yesterday he would review a magistrate’s decision to dismiss a manslaughter charge against a police woman who shot dead a fellow officer.

The director, Reg Blanch, QC, said he would direct Constable Sheree Schneider to stand trial if he found that Leeton Magistrate Barry Wooldridge had made an error in judgement.

Constable Schneider, 20, shot dead Sharon Wilson, also 20, with a service revolver at Leeton police station on November 30. She said she thought the revolver was empty.

Mr Blanch said he would make a decision in four to eight weeks. Constable Schneider, suspended with pay, was to answer a charge on August 31 of using a firearm with disregard for safety.

Schneider Case
In New South Wales, at Leeton police station on 30-Nov-1988, a junior policewoman produced a pistol and shot dead another officer. Sheree Ann Schneider claimed it was an accident. Satisfied the pistol was unloaded, she pulled the trigger without looking where the gun was pointed. The charge of Felonious Assault was dismissed in the lower court on 28th July 1989 under section 41 (vi) – the presiding officer ruled that no jury would convict. Use Of A Firearm In Disregard For Another Persons Safety was dismissed on 27th April 1990. The female did not even lose her job, presumably her fellow officers hope she will be more careful in future.

Court Ignores Duty
It is axiomatic with all weapons training that they never be pointed at anyone unless they are intended to be used —even in jest. Deliberately pulling the trigger without looking where the .38 pistol was pointed was criminal irresponsibility. Sharon Wilson was killed as the result of criminal negligence; a failure that should not be tolerated from any citizen, much less a police officer. Not knowing the gun was loaded is no excuse for anyone, least of all a trained professional. For the courts to fail to penalise this action is to commit more crimes; the denial of the importance of duty and the magnitude of taking a life.

The Law Repeats The Role Of Indulgent Parents
Schneider escaped penalty by adopting the infantile excuse that she was merely the hapless victim of the inadequate police weapons training program; that this was accepted by the authorities is not an aberration. Trial for murder is no longer a matter of resolving fact; it has become a re-enactment of the spoilt child caught by their indulgent parents; if the miscreant can deflect blame while generating sympathy then all is forgiven.

[…] Paul Quinn died of a gunshot wound received on duty at Bathurst; in 1988 probationary Constable Sharon Wilson died after being accidently shot by a colleague at Leeton; in 1989, Constable Alan McQueen died […]