Awards:  was awarded a Certificate of Merit for actions involving a suicide at Watsons Bay on the 31 August 1923, as was Constable George F. DAY & Constable George MILES, from the Royal Humane Society of NSW

Posthumously commended by the Royal Shipwreck Relief and Humane Society of N.S.W. in August 1928 for his rescue efforts

Cause: Pernicious Anemia ( lack of vitamin B12 needed to produce red blood cells ) 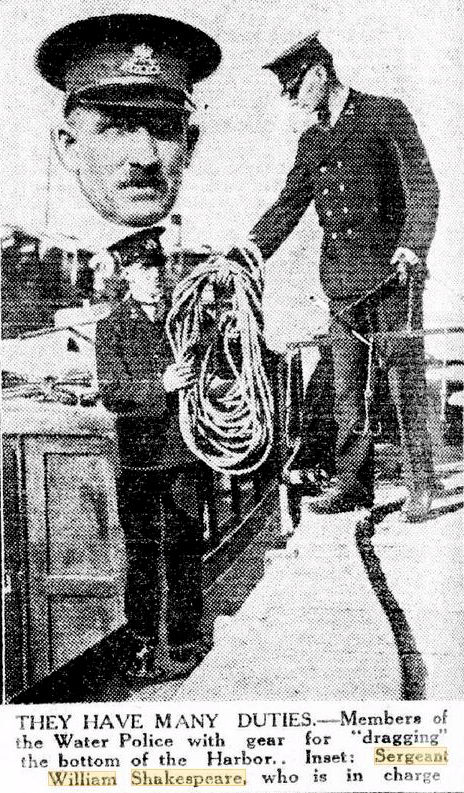 The funeral of the late Sergeant William Shakespeare was attended by 100 members of the Police Force, who walked behind the hearse to the Regent Street mortuary station.

The Police Band played the ” March Funebre, ” and the cortege passed through large crowds. The Commissioner of Police ( Mr. James Mitchell ) was represented by Inspector Irving.

Tales of the Harbour

Sydney’s worst maritime disaster occurred out of the blue on a sunny spring day in 1927. As well as the tragic loss of life, the accident is memorable for acts of heroism.

On the afternoon of Thursday 3 November 1927, commuters hurried to board the Greycliffe, a ferry operating between Circular Quay and Watsons Bay. It was known as the ‘school boat’, because so many children caught it home from schools in the city. It was a beautiful day to be on the harbour: the water was calm, the sun shone and visibility was good.

Around 4.15pm the ferry left the quay on its usual route, stopping at Garden Island to pick up dockworkers. As it left Garden Island, the RMS Tahiti, a mail steamer carrying around 300 passengers bound for New Zealand, approached it from behind. The Tahiti with its steel bow was roughly three times the size of the wooden Greycliffe, and was moving very quickly: witnesses estimated that the ship was travelling at around 12 knots instead of the permitted 8. The smaller boat made an inexplicable turn into the Tahiti’s path. The Tahiti sounded its horn and immediately cut its speed, but it was too late – the ship couldn’t stop. Passengers and crew had little time to react as the steamship hit the ferry, cleaving it in two.

Some passengers were thrown into the water by the impact, while others dived overboard. Some unlucky victims were trapped in the wreckage, including many who were sitting in the men’s and women’s saloons. The ferry’s hull sank rapidly, sucking nearby survivors underwater, with only the strongest swimmers able to reach the surface again. Other boats sped to the scene, their occupants pulling people from the water and launching lifeboats in a frantic search for survivors.

Tales of loss and survival

The NSW Water Police launch Cambria was on a routine patrol near the accident and its officers sprang into action, speeding towards the stricken ferry. Its skipper was the notably named 53-year-old Sergeant William Shakespeare, who had joined the police in 1900 and had already performed many daring rescues. The officers tore off their boots and entered the water, assisting in the rescue of 11 people. The survivors were taken to Bennelong Point for medical assessment and to be reunited with their loved ones.

Forty people, ranging in age from toddlers to senior citizens, lost their lives in the worst maritime disaster Sydney Harbour has witnessed. Dramatic and terrifying stories emerged. Schoolgirl Gene Wise recalled opening her eyes underwater to see the Tahiti’s propeller heading straight for her, but she managed to swim out of its path. Rescuers witnessed terrible scenes, including the discovery of Mary Corby, who drowned along with her six-year-old daughter Noreen, found dead in her mother’s arms. The sad task of searching for the dead began the next day, with two divers sent down to the wreck of the ferry to collect the bodies of those trapped in the debris. The victims’ belongings were also collected and sent to the Phillip Street police station, now part of the Justice & Police Museum. Families and friends of the missing had the devastating task of identifying personal items retrieved from the harbour to assist the police in their investigations.

Three inquiries were held, including a coronial inquest held in part at the Water Police Court (now part of the Justice & Police Museum). The inquest identified a range of factors that had contributed to the accident, including the Tahiti’s speed and the peculiar design of the Greycliffe’s wheelhouse, which created a blind spot that may have obscured the captain’s view of the approaching Tahiti.

During the inquest, relatives of the dead expressed their gratitude towards Sergeant Shakespeare for his bravery and kindness. Six months after the Greycliffe tragedy, Shakespeare himself was gravely ill with pernicious anaemia. When it was announced that he needed blood transfusions, almost every man at the Water Police Station gave blood in an attempt to save his life. Sadly, Shakespeare died soon after, on 24 May 1928. He was posthumously commended for his bravery during the Greycliffe rescue operation.

William Shakespeare, sergeant first-class of the Water Police, died in Sydney Hospital at 4.40 a.m. yesterday of pernicious anaemia; Four blood transfusions had been made in an unsuccessful effort to save his life. Two of his comrades in the force, Constables Milne and Bowers, and his son, William Shakespeare, Junior, gave their blood for this purpose.

SHAKESPEARE.- On May 24, 1928, at Sydney, Senior Sergeant William Shakespeare, of the Water Police, Sydney, and beloved only brother of Mrs. C. W. Williams, Hawthorn Avenue, New Town, In his 53rd year.

The estate of the late Water-Police Sergeant William Shakespeare has been valued for probate purposes at £1134. Letters of administration were granted to the Public Trustee.

On Escort Duty Sergeant William Shakespeare, of the New South Wales Police Department, arrived from Sydney on escort duty by the s.s. Westralia yesterday. A Hobart prisoner, now on remand, is to be taken to Sydney to answer a charge of fraud.

Constable Ross, of Burren Junction, takes the place of Constable Smith at Tamworth, the latter having recently been transferred.

Constable Tindall, who comes from Wollongong, has been definitely appointed to Tamworth to fill the vacancy of Constable Shakespeare, who some weeks ago left for Sydney to rejoin the water police force.

Thank you to whoever it was that put this information together. This was my Great Grandfather