Funeral location:  ?, Wagga Wagga  ( Due to current Govt. restrictions of 10 persons at a Funeral due to the Cornona19 Virus Pandemic – this will be a Private Funeral )

The Service will be Livestreamed.

See this Link if above link does not work. 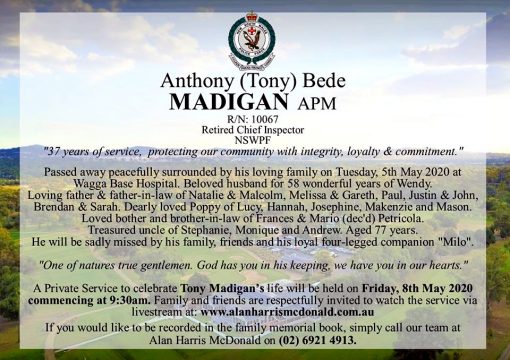 Today our city has lost one of natures true gentleman. A man who served to protect our community with integrity, loyalty and commitment for 37 years. It is with deep sadness that we announce the death of Tony Bede Madigan APM.

Police officers came to honour the memory of chief inspector Anthony Madigan, who died on Tuesday after a long and decorated career in the force.

He will be remembered for his unwavering work ethic and dedication to his community, evidenced by the vast collection of medals that were on display at his funeral on Friday.

During his career he was awarded some of the highest honours a police officer can receive, including the Australia Police Medal and National Police Service Medal for his lifetime’s accomplishments.

The medals were distributed among his family members, who will be keeping them to remember the long-lasting impact he made on the community.

His wife Wendy Madigan will be remember him as a dutiful family man who always found ways to make time for his five children and five grandchildren.

“He was a loving husband, an amazing father, and a really amazing grandfather,” Mrs Madigan said.

“He was also a very humble man; he never bragged about anything.”

Mrs Madigan was married to Mr Madigan for 58 years, but she still remembers the first time they met as though it were yesterday.

The two of them first locked eyes on each other in Sydney when they were only 19 and 20 years old, and they would quickly fall in love and end up sharing lifetime together.

“I was introduced to him by a friend of mine who was a police officer and, as they say in the classics, the rest is history,” Mrs Madigan said.

Mr Madigan’s son Brendan Madigan he took some consolation knowing that his dad lived a good life right up until the very end.

“Mum and dad had a love of travel over the last 25 years, so they enjoyed a lot of overseas travel together and they shared a lot of memories,” Brendan said.

“He was a great father.”

Chief Inspector Paul Smith said Mr Madigan was “a policeman through and through”, and that his death was a loss to the entire NSW Police Force.

“Tony approached life and his career as a police officer with determination, confidence, and enthusiasm,” Inspector Smith said.

“At the end of his career Sergeant Tony Madigan had provided over 36 years of outstanding service to the NSW Police Force and the community of NSW.”