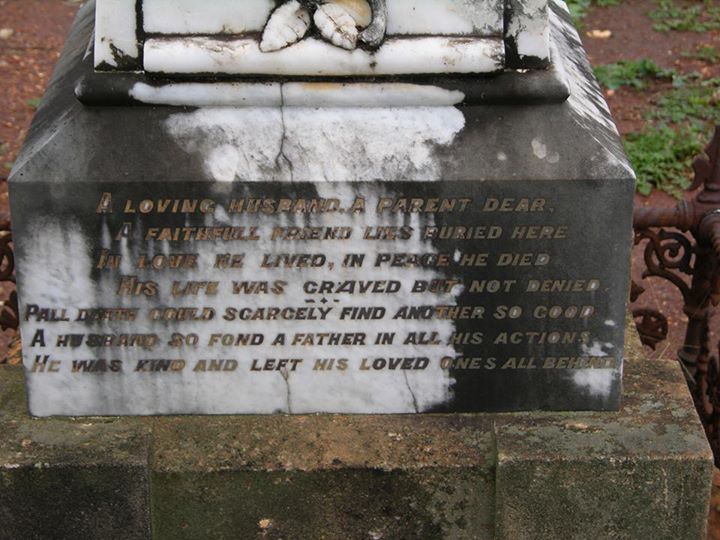 It is with feelings of the very deepest regret that we are called upon to announce the death of Sergeant George Brayne, which sad event took place shortly after midnight on Sunday. The deceased gentleman had long been a sufferer from asthma and heart trouble, but no one to see his stalwart and robust figure — Sergeant Brayne was a man of fine physique — a month or so ago would have thought that he was ever troubled with ill health, or that his hours had been numbered —

A few weeks ago Sergeant Brayne received notice of his removal to the charge of Sunny Corner police station, and in consequence he disposed of his household furniture, &c., but while waiting to hand over his papers to his successor contracted pneumonia and was obliged to take to his bed. Mrs. Brayne was also taken seriously ill about the same time, but subsequently recovered. A private nurse ( Mrs. Thos. Golding ) tenderly nursed the sick officer, and Dr. Corfe was in attendance night and day, but it soon became apparent that there was little hope of a recovery. Sergeant Brayne lingered for a couple of weeks and passed away as stated, the immediate cause of death being heart failure.

Sergeant Brayne was a native of Brighton, England, and was 56 years of age at the time of his death. He was a son of the late Charles G. J. Brayne, at one time head gaoler at Dubbo, and who died some twenty years ago. When seven years of age young George Brayne came to New South Wales with his parents, and 33 years ago entered the police force, his first station being Parramatta. Seven years later he was appointed to the charge of a station, and proving himself a zealous and capable officer rose to the rank of Sergeant. During his career he was stationed at Hill End, Tambaroora, Bathurst, Mundooran, Denison Town, Girilambone, Rylstone, Wollar, Carcoar, and five years ago last March was appointed to succeed Sergeant O’Brien at Peak Hill. About a year ago Sergeant Brayne was offered the charge of Parkes police station, but preferred to remain at Peak Hill. Had the Sergeant lived another few years he would have been eligible to retire on a well-earned pension. In 1874 Sergeant Brayne married Miss Amelia Gallagher at Parramatta, daughter of the late Constable Gallagher of that city, and together they reared a family of two sons and six daughters — Messrs. George and Ernest, Mrs. Barton, and Misses Edith, Clara, Muriel, Victoria and Minnie. Deceased was a brother to Inspector C. W. Brayne of Braidwood, Constable W. H. Brayne, of Double Bay, and a brother of Mrs. S. Howlett, Parramatta.

The funeral took place on Monday afternoon, and was very largely attended, the sad cortege being considerably over a quarter of a mile in length.

Sergeant McLeay, Constables Williams (Tomingley), Dixon (Alectown), Hill and Pope (Peak Hill) acted as pall-bearers, and in trooper’s uniform, and on horseback, preceded the hearse to the cemetery where the remains of their late comrade were laid to rest in the Church of England portion, the burial service being conducted by the Rev. H. G. Wiltson.

The Express tenders its deepest sympathy with the bereaved widow and family in this, one of the greatest of earthly trials that they could be called upon to bear.

Sergeant George Brayne, who has been over 30 years in the police service of New South Wales, died at Peak Hill on Monday, after a month’s illness. The deceased officer, who was known to many of the old diggers of Araluen now resident in the Newcastle district, had just been transferred to Sunny Corner, but was unable to go to his new station, having contracted pneumonia. With his brother*, Sub-inspector C. W. Brayne, of Braidwood, he was previously a miner working in the claims at Araluen in the palmy days.

* This article states that George & Charles were brothers, whilst other articles have them as father & son.

The Death of Sergeant Brayne – The Peak Hill Express says that the death of Sergeant George Brayne has been greatly lamented by all in that district. After lingering for a couple of weeks he passed away on Sunday week at the age of 56. He was a brother* of Sub Inspector Brayne, of Braidwood. He was a native of Brighton, England. He has been in the police force 33 years. A few weeks before his death he received notice of his removal to Sunny Corner, and in consequence had disposed of his personal effects, and was only waiting to hand over his papers to his successor when he was laid low with pneumonia, which rapidly took him off. His funeral was very largely attended, the cortege being considerably over a quarter of a mile long.

Sergeant George Brayne has been appointed an Inspector, at Peak Hill, under the Liquor Act, 1898.

After a brief illness, Mrs. Amelia Brayne, of 108 Wigram-street, Harris Park, died at Parramatta District Hospital on Monday. She was aged 85 years. She was the widow of the late Police-Sergeant Geo. Brayne, of Peak Hill, and had resided at Harris Park for 32 years. She is survived by Mr. George Brayne (Harris Park) and Mr. Ernest Brayne (Punchbowl), sons, and Mrs. H. Barton (Westmead), Mrs. A. R. Warren (Rosehill), and Mrs. O. Rock (Concord), daughters.

The funeral left the parlors of Charles Innes and Son, Parramatta, on Tuesday afternoon for the Church of England Cemetery, Rookwood. Rev. G. F. B. Manning officiated. Numerous floral tributes were forwarded.