Eden
A particularly beautiful area of the New South Wales far south coast originally settled by whalers and now a fishing port and a popular, but relatively undeveloped, holiday resort town.
Eden, located 476 km south of Sydney, is the last town of any significance before crossing the border into north eastern Victoria. With a population of 3277 it is situated 50 m above sea level upon undulating land on a point that juts out into Twofold Bay. This idyllic coastal town is bounded to the north and south by national park and by woodland to the west.

It is thought the area was inhabited by the Thawa Aborigines prior to white settlement. George Bass noted Twofold Bay in December 1797 as he travelled south down the New South Wales coast. On his return in early 1798 he entered the bay where he named Snug Cove for the security to shipping it afforded. It is here that the Eden Wharf now stands.

Later in 1798 Bass set off again for Van Dieman’s Land with Matthew Flinders, this time making a detailed and accurate survey of Twofold Bay. It was during this survey that Bass and Flinders made contact with the local Aborigines. Flinders offered them some biscuits and received some fat (probably whale fat) in return. After tasting it Flinders recorded that while ‘watching an opportunity to spit it out when he should not be looking, I perceived him doing precisely the same thing with our biscuit’.

The early history of the bay is closely tied to the whaling industry and it is in recognition of this that the inaugural Eden Whale Festival was held in October 1996. The first whales were killed as early as 1791. The migration of these animals (mostly right whales) to and from the Antarctic waters took them past Twofold Bay between May and November of each year.

Commercial exploitation commenced in the early years of the nineteenth century when whaling ships took shelter in the bay from inclement weather, subsequently using it as a base for operations.

The first white settlement was made by John Raine in 1828 when he established the first shore whaling station on mainland Australia.

In the early 1830s the three Imlay Brothers followed suit, training local Aborigines as whalemen. The brothers, major pioneers of and landowners in the district, moved to Australia from Scotland between 1829 and 1833. Peter, the oldest and second to arrive, first visited Twofold Bay around 1833 and decided to live there. Followed by George they soon turned to cattle rearing, which they shipped to Tasmania, South Australia and, later, New Zealand. They erected Eden’s first, albeit modest, building, a small slab and bark hut at Snug Cove. Unfortunately the depression of the 1840s broke the family financially. The Walker Brothers, merchants of Sydney, foreclosed on the Imlays and acquired the land.

A particular group of killer whales visited the area each year, using the south of the bay as their base for the season. Locals, recognising them by distinctive markings, assigned them individual names and found them to be a great help in hunting and bringing whales into the bay.

The killer whales hunted in packs like wild dogs, driving the whales into shallow water, preventing their escape to deeper waters and attempting to frustrate their attempts to take in air. Apparently the killer whales, if they detected whales about, would travel to the whaling station, make a great deal of noise, wait for the boats to launch then lead them to the whales.

The combination increased the certainty of a kill, ensuring a meal for the killer whales. They fed almost exclusively on the lips and tongue of the whales, leaving the blubber etc for the whalers.

Eden was named after the British Secretary for the Colonies, Baron Auckland, whose family name was Eden. Although permission was given for the establishment of a township at Twofold Bay in 1834 the town was not laid out until 1843.

Boydtown, initially a more substantial township at the south of the bay, declined after Benjamin Boyd encountered financial troubles, and this, coupled with the discovery of alluvial gold at Kiandra in the 1850s, led to the development of Eden, which was the logical port for the trek to the goldfield. However, the rush had ended by 1866, the population declined and the town never progressed as planned.

Apart from whaling, which died off in the late 1920s, wattlebark (a source of tannin) and, to a lesser extent, dairying and brick making, were the main industries in the early days of white settlement.

The exploitation of timber, now a principal source of income for the town, came to prominence at the outset of the twentieth century due to the demand for railway sleepers. These were shipped to China from Snug Cove and, later, to Germany and New Zealand as well as being used locally.

Commercial fishing, now another staple industry for the township, had been carried on for many years but it was not until tuna canning commenced in 1949 that business took off.

Whale Watching
The whale-watching season is October to November, though sightings (usually of humpback whales) may also occur in September and December. Listen for the siren which announces the presence of whales in the bay.

Historic Buildings
The Great Southern Inn at the corner of Imlay and Chandos Streets is very attractive. It is something of a centrepiece in the town. The Surveyor’s Office, diagonally opposite, and the Hotel Australia at 60 Imlay St are also of interest. The Court House over the road from the Police Station in Cocora St, although built in 1857 of sandstone from Pyrmont in Sydney, has been ruined with weatherboard and gloss paint laid over the sandstone. 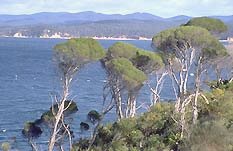 Eden police cover an area from Eden to the Victorian boarder, west to Bombala (approx. 50km) and north of Eden approximately 20km. The population of Eden is around the 5,000 mark, and surrounding areas around 2,000. Holiday season will swell the population to 15 – 20,000 people, at any other time visitors are about 3,000 people. 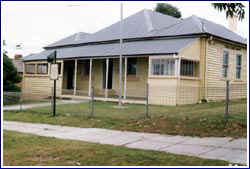 The Court House over the road from the Police Station in Cocora St, although built in 1857 of sandstone from Pyrmont in Sydney, has been ruined with weatherboard and gloss paint laid over the sandstone.The old but still used Eden Court HouseBesides normal police work, there is ongoing work with Custom’s being that Eden is a large working port involving overseas shipping. Eden Port also houses the largest fishing fleet on the East Coast of Australia, therefore there is a large involvement with NSW Fisheries on both State and Federal legislation.

Eden station has a police boat and all staff are accredited to use and man it.

History about Eden outside the Police StationThere still seems to be some misconception about contacting local police. 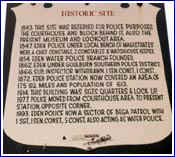