Sgt 3/c Francis ( Frank ) A. Metz is commended for the part played in connection with the search & subsequent arrest of 3 offenders, who were involved in the shooting of Constable L. J. Browning ( # 8645 ) at Nowra on the 23rd of November 1964 –

Frank Metz was a caring family man, a dedicated police officer and an ‘adventurer’ 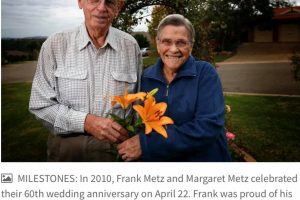 Colleagues remember Frank Metz’s as a distinguished NSW police officer, but his family remember a wonderful husband and a caring father with a dry wit.

Francis Metz, fondly known as Frank, passed away on February 22 at 92 years of age. He joined the NSW Police Cadets on January 4, 1944, and that kicked off an illustrious career.

His wife, Margaret, said they met at Quandialla when Frank was there relieving the permanent officer.

“I was on a bus trip to the Ballinaclash Orchard when a busload of young people went cherry picking,” she said.

“It was raining and we had to go to the pictures, and | from there the rest is history. We were married in 1950.”

Margaret said he was a wonderful husband, father and policeman and she very proud of him in anything that he did.

Son, Robert Metz, said the movement around NSW was a real testament to the frequency of his dad’s promotions.

“Within his police career and with the moves, he eventually ended up a superintendent, the officer in charge of the Riverina District,” he said.

“They decided to enjoy their retired life together in Wagga,” Robert said.

“Lots of travel for leisure and for the family.

“While Mum and Dad’s family was expanding, he did everything he could to support his children through their journey as parents.

“Nothing was too much for Dad.”

His daughters Marianne Flowers and Louise McDermott said their father made everything into an adventure.

“He was always getting us to try new things like apples, sultanas and honey sandwiches,” Marianne said.

“When mum was working in the school holidays, dad used to take us off on day trip adventures,” Louise said.

Marianne said Frank taught all the children to stand up for what was right and to be fair and respectful and he had a dry sense of humour.

“He used to say ‘how can I soar like an eagle when I am surrounded by turkeys’,” she said.

Margaret said he dedicated his time and efforts to the Rotary, the Albion Park Bush Fire Brigade, the Retired Police Association of NSW and the Association of Independent Retirees.

“I would also like to thank the police for their contribution to the funeral,” she said. “When they stopped the traffic, I knew he would have loved that. Also, thank you to the staff at the Forrest Centre for caring for him.”

Reprinted from the Wagga Daily Advertiser.

A bit of info on Frank Metz, who I clerked for at the newly established Warilla Division.   He came up from ( Inspector 3/C ) Bega Division in the very late 1970’s, and took over from Dave Cooper, Inspector 2/C, who opened the new Warilla Division ( Lake Entrance Rd ) as OIC.  Dave made Inspector 1/C and moved up to the Blue Mountains somewhere.

Because Frank wanted to live in Kiama, which was part of the Nowra Division at the time, but also wanted to benefit from the rental of an “official” residence, he managed to get Kiama shifted from the Nowra Division into the Warilla Division.   It was a very logical move as Kiama was 10 minutes from Warilla but 30 minutes from Nowra (all with lights and siren) although Nowra and Kiama troops didn’t agree with the change at the time.   Frank also wanted to live in Kiama as he was a keen bowler and belonged to the Kiama bowling club.

The new Police Stations at Warilla, Queanbeyan, and Nowra were all built and opened in the same year and I “clerked” at all of them from 1979 to 1982, ending up at Nowra Division in late 1982 (followed Ann Todkill at Nowra).  I left Warilla for Queanbeyan early in 1981 where Ross Gorham was the OIC.   Dennis Catt was the OIC at Nowra when I started there.

A Requiem Mass for the repose of the soul of Mr Francis Metz will be held on Wednesday 27th February 2019 at St Michael’s Cathedral, 10 Church Street Wagga Wagga, commencing at 10:30am.

Following the Mass the cortege will process to the Wagga Wagga Lawn Cemetery, Brunskill Road, for the committal.
Service medals to be worn.
In Lieu of flowers donations towards Dementia Australia will be greatly appreciated.

February 26, 2019
A good and decent man who served the state with distinction. RIP
Frank Goodyer,
Wagga Wagga, New South Wales
Published in The Daily Advertiser from Feb. 26 to Feb. 27, 2019
[divider_dotted]
Please follow and like us: