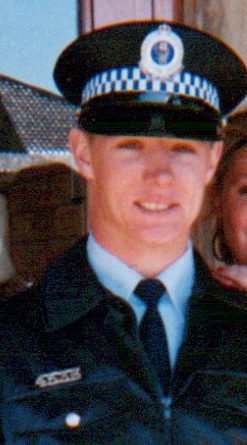 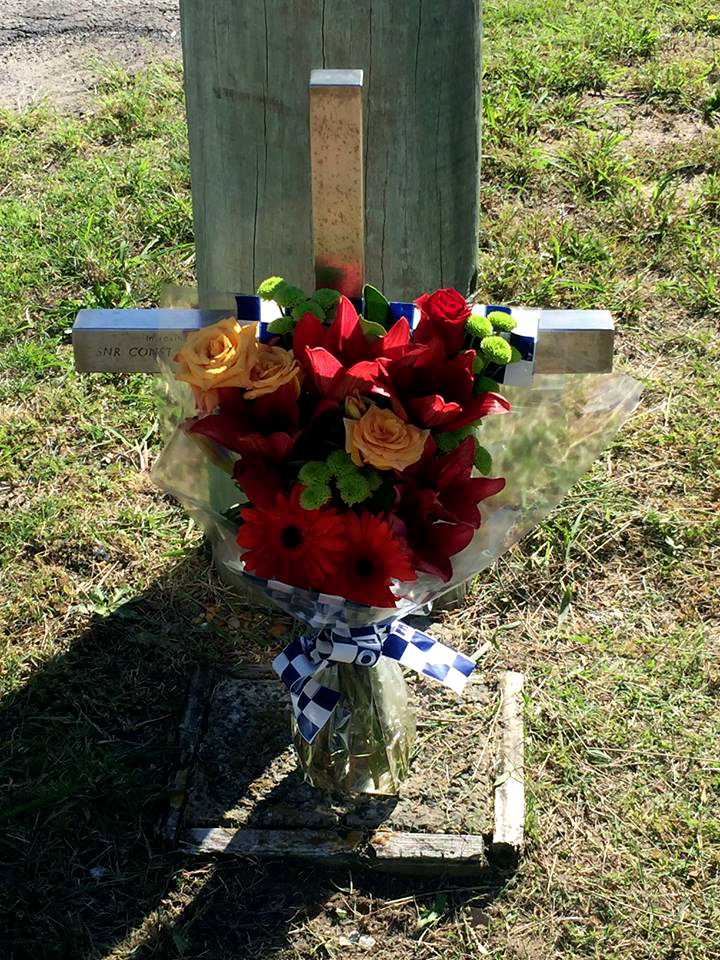 About 6.10pm on 13 April, 2002 the senior constable was driving a Highway Patrol vehicle in Hillview Street, Woy Woy. When the vehicle reached the intersection of Nambucca Drive, it collided with another vehicle before leaving the roadway and hitting a power pole. Senior Constable Thornton sustained extensive injuries and died at the scene of the accident.

The constable was born in 1966 and joined the New South Wales Police Force on 7 August, 1987. At the time of his death he was attached to the Brisbane Water Highway Patrol.

Christopher IS mentioned on the Police Wall of Remembrance

In April 2002, Senior Constable Chris Thornton was involved in a pursuit of a speeding motorist when his vehicle was struck by another vehicle that failed to stop. Thornton died as a result of the injuries received when his vehicle collided with a pole. The offending vehicle was located and the driver arrested and charged.

Police officers were again united in grief yesterday in mourning one of their own for the second time in less than two weeks.

Newcastle’s Christ Church Cathedral was a sea of blue as hundreds of officers remembered Senior Constable Chris Thornton, 35, killed when his patrol car crashed into a power pole in Woy Woy last Saturday.

After the service, police lined both sides of the road to form a guard of honour as hundreds more, including acting Commissioner Ken Moroney, marched to the sombre beat of a drum.

A 56-year-old man has been charged in relation to the incident, which has rocked the force just weeks after Constable Glenn McEnallay was shot dead in a car chase in Sydney.

Many officers at yesterday’s service had donned their dress uniforms on April 9 for Constable McEnallay‘s funeral.

The Police Minister, Michael Costa, was at yesterday’s service, slipping quietly in and out of the cathedral, almost unnoticed among the crowd of more than 1000.

Mr Moroney used the occasion to call for public support.

“While nothing can make up for his passing, the heartfelt reaction of the communities Chris grew up in, then later served, will mean his death was not in vain,” Mr Moroney said.

“It has also made people realise the extraordinary work our police do in creating a safer society.”

His words were echoed by the Anglican Dean of Newcastle, the Very Rev Graeme Lawrence, who called on society to renew its respect for members of the police.

“In some ways that word is an old-fashioned concept, but one we would do well to revive,” he said.

“As a person and a police officer, Chris earned that respect, admiration and affection.”

Senior Constable Thornton‘s partner of six years, Sarah Matthews, stood alongside Dean Lawrence in the street as the hearse moved slowly away to the beat of the drum.

Earlier she had wept as close friend John Kinney told the gathering how “Thorno” had paid the ultimate price of police service.

“He swerved to miss another vehicle and chose to risk himself for another person, paying the ultimate price for his courage and honour,” Mr Kinney said.

“To me that is Christopher John Thornton, my mate, a man anyone would be proud to say they knew.”

“His death has had a dramatic effect on his colleagues, more so, because he was one of the first people to offer help to workmates after hours, and also at work,” assistant commissioner Waites said.

“I had the pleasure and honour of knowing Chris personally.

“He was a person who loved to have a good time, while also having a lot of common sense,” he said.

Senior Constable Thornton, who lived with his partner of six years, Sarah, attended the Police College at Goulburn in 1987.

Since his graduation that same year, Senior Constable Thornton had worked within the Brisbane Water Command, initially as a general duties officer, before joining highway patrol in 1989.

Ten of his 15 years as a policeman were spent working as a highway patrol officer.

Senior Constable Thornton was travelling north along Hillview St in Woy Woy about 6.10pm on Saturday, April 13, when the marked vehicle he was driving crashed into a power pole.

The 35-year-old police officer died at the scene as a result of his injuries.

A 56-year-old man, Leonard Allan Rowley, has been charged with several driving offences in connection with the accident.

Commissioner Peter Ryan and Deputy Commissioner Operations Dave Madden attended the scene on the night of the accident.

A-G urged to appeal against sentence

The New South Wales Opposition has called on the Attorney-General to override the Director of Public Prosecutions and launch an appeal against a sentence given to the driver of a car that hit and killed a highway patrol officer.

Leonard Allan Rowley walked free after receiving a two-year suspended sentence for an incident that claimed the life of Senior Constable Chris Thornton in his highway patrol car on Hillview Street in Woy Woy.

Opposition leader John Brogden says, given that Rowley had been drinking, was unlicensed and fled the scene, it is unacceptable that the DPP will not lodge an appeal.

The patrol officer’s widow Sarah Matthews says it is an insult and urges the Attorney-General to step in.

“It astounds me,” Ms Matthews said.

“This is a legal system that Chris believed in, he stood behind and he enforced every day and now it’s let him down.”

Hearts go out to family of fallen officer

FREADA and Barry Thornton’s hearts skipped a beat when they heard about the death of young detective Will Crews.

It may be nearly nine years since their son Chris Thornton was killed on duty, but the Blackalls Park couple said it still felt like yesterday.

“You learn to try and get on with your life, you have to,” Mrs Thornton said yesterday.

“Another one, another young life. So, so young.”

Mrs Thornton said her heart went out to Senior Constable Crews’s family as they attempt to deal with the loss.

“We know what it is like and we know it took us four or five years before we could get ourselves going again,” she said.

“We just couldn’t do anything for years, it gutted us.”
See your ad here

Senior Constable Thornton was in pursuit at Woy Woy on April 13, 2002, when his vehicle hit a power pole, killing him.

The Thorntons will attend another police remembrance day at the end of this month, like they have done every year since that day. The honour roll read out at the Christ Church Cathedral service will contain another name this year.

When Sarah Matthews returned home after her shift at Gosford Hospital on the evening of April 13, 2002 and spotted a row of waiting police cars she thought the neighbours were having a noisy party.

“It never struck me what was coming next,” remembers the emergency nurse who was told the worst — her fiancé Senior-Constable Chris Thornton had been killed on duty hours earlier.

“It didn’t hit me. Even when I was told. I don’t think that’s something that ever leaves you.”

This week Miss Matthews, Kylie Kerr and Tracey Holt will get together to remember their partners, Sen-Constable Thornton, Sen-Constable Peter Gordon Wilson and Sergeant Richard Whittaker, who all died on duty while with the Brisbane Water Local Area Command.

On Thursday officers from Brisbane Water LAC will take part in a paddle to raise money for NSW Police Legacy to support the families of fallen officers.

“You never want to be a part of Legacy but now we are part of this unique group and without Legacy we wouldn’t have each other,” Miss Matthews said.

But for two of the women, the close bond was forged by their shared loss and haunting similarities in how their partners lost their lives.

Sen-Constable Thornton, 35, died in a motor vehicle accident while on patrol in Woy Woy in 2002, while Mrs Kerr’s long-term partner Sen-Constable Wilson, 41, was killed when he was hit by a car while carrying out speed checks on the M1 at Somersby in 2006.

Both men were based at Brisbane Water LAC, both died in car accidents on a Saturday night, and both had the same patrol car number — 202.

Mrs Holt, whose husband Sgt Whittaker was stationed at the Gosford drug unit and was involved in drug investigations at the time of his death when he died from a brain haemorrhage in 1991, said the annual paddle is a “beautiful day”. “It is amazing the effort Daniel Sullivan and the team put in to keep the memory going of old work mates and have a good time doing it,” she said.

Celeste Thornton March 12, 2020:     Would like to get message to any colleges of Snr Const Chris Thornton who was killed on duty in 2002.   Would like to let them know my parents and I are burying his older brother Leslie on Mon 16th March 2020 at Lake Macquarie memorial park 10am.